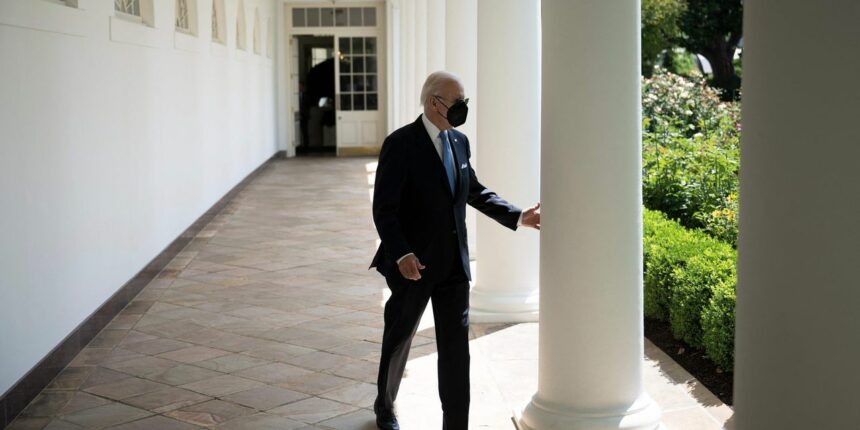 President Joe Biden will receive his updated COVID booster on Tuesday and will urge Americans to get the shot, which targets both the original virus and omicron variants that have been dominant in the U.S. and elsewhere this year.

The news, first reported by NBC News, was confirmed by a tweet from White House assistant press secretary Kevin Munoz and by an emailed statement, in which the White House said, “The President will receive his updated COVID-19 vaccine and will deliver remarks on the ongoing fight against the virus.”

Biden tested positive for COVID-19 in July, then did so again three days after he had been cleared from isolation in a rare rebound case after receiving the anti-viral drug Paxlovid. The president was fully vaccinated and boosted and suffered only mild symptoms. Health officials recommend that people who have contracted COVID wait at least three months after infection to get the booster.

The bivalent booster has been available to adults and older children since early September, and its use was expanded to children as young as 5 in October. But data from the Centers for Disease Control and Prevention show fewer than 20 million Americans have received it so far — less than 10% of those eligible.

That’s a slow start given expectations for a wave of new cases in the winter months.

As immunity from previous shots wanes and new variants spread, health officials are urging people, especially those over 65, to get the updated booster. A study earlier this month by the Commonwealth Fund concluded that a strong booster campaign this fall could save 90,000 American lives and prevent more than 936,000 COVID hospitalizations in the U.S.

CDC data released Friday showed the two new COVID variants dubbed BQ.1 and BQ.1.1 continued to gain traction in the U.S. in the latest week, accounting for 16.6% of all cases, up from 11.4% a week ago.

The two variants are lineages of BA.5, the omicron subvariant that remains dominant but has shrunk to account for 62.2% of circulating variants, the agency said, down from 67.9% a week ago. The CDC had previously combined data about BQ.1 and BQ.1.1 with BA.5 cases, because the number of cases caused by the new variants was so small. BQ.1 was first identified by researchers in early September and has been found in the U.K. and Germany, among other places. The New York area, which includes New Jersey, Puerto Rico and the Virgin Islands, has the highest number of cases involving those variants, at 28.4%, the data show.

U.S. known cases of COVID are continuing to ease and now stand at their lowest level since mid-April, although the true tally is likely higher given how many people overall are testing at home, where data are not being collected.

Coronavirus Update: MarketWatch’s daily roundup has been curating and reporting all the latest developments every weekday since the coronavirus pandemic began

Other COVID-19 news you should know about:

• The head of the CDC has tested positive for COVID, the Associated Press reported. Rochelle Walensky, who is up to date on her vaccinations, tested positive Friday night and had mild symptoms, the CDC said in a statement. “Consistent with CDC guidelines, she is isolating at home and will participate in her planned meetings virtually,” the agency said. Senior staff and close contacts have been informed of her positive test and are monitoring their health.

• The pandemic caused historic learning setbacks for America’s children, erasing decades of academic progress and widening racial disparities, according to results of a national test that provide the sharpest look yet at the scale of the crisis, the AP reported separately. Across the country, math scores saw their largest decreases ever. Reading scores dropped to 1992 levels. Nearly 4 in 10 eighth-graders failed to grasp basic math concepts. Not a single state saw a notable improvement in average test scores, with some treading water at best. Those are the findings from the National Assessment of Educational Progress — known as the “nation’s report card” — which tested hundreds of thousands of fourth- and eighth-graders across the country this year.

• The Chinese economy grew 3.9% over a year earlier in the third quarter, quickening from the 0.4% expansion recorded in the second quarter, Dow Jones Newswires reported. The reading topped the 3.5% economic growth expected by economists polled by The Wall Street Journal. For the first nine months of the year, China’s GDP expanded 3.0% over a year earlier, well below the 5.5% annual growth target set by the government. Growth has been crimped all year by China’s zero-COVID policy, which has led to repeated lockdowns of commercial and residential areas.

• The pandemic interrupted measles-vaccine campaigns globally in 2020 and 2021, leaving millions of children unprotected against one of the world’s most contagious diseases, whose complications include blindness, pneumonia and death, Reuters reported. After what health experts call the biggest backslide in a generation, 26 large or disruptive measles outbreaks have occurred worldwide, according to the World Health Organization. A devastating outbreak in Zimbabwe has killed more than 700 children this year, chiefly among religious sects that do not believe in vaccinations.

Here’s what the numbers say:

The global tally of confirmed cases of COVID-19 topped 627.6 million on Monday, while the death toll rose above 6.57 million, according to data aggregated by Johns Hopkins University.

The Centers for Disease Control and Prevention’s tracker shows that 226.6 million people living in the U.S., equal to 68.2% of the total population, are fully vaccinated, meaning they have had their primary shots. Just 111.4 million have had a booster, equal to 49.1% of the vaccinated population, and 26.8 million of those who are eligible for a second booster have had one, equal to 40.6% of those who received a first booster.