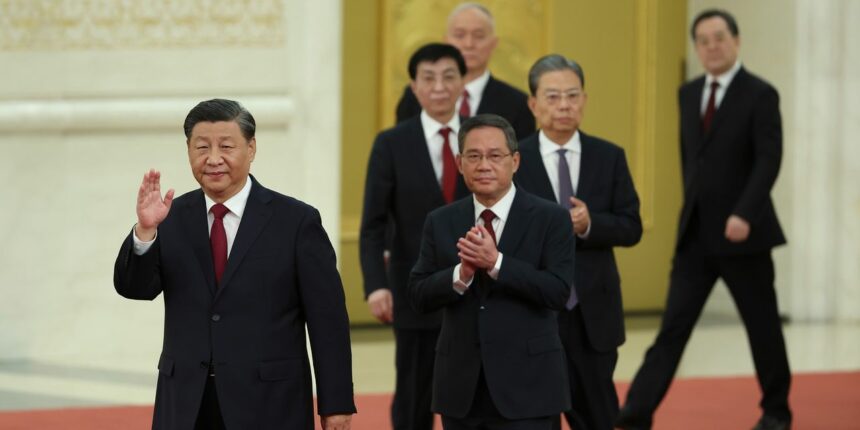 Between 1980 and 2019, China’s average annual GDP growth rate was over 8%—faster than any Western economy—and in the 2000s, its economic trajectory exceeded mere catch-up growth (using Western technologies). China started making its own technology investments, producing patents and academic publications, and spawning innovative companies such as Alibaba
BABA,
,
Tencent
TCEHY,

“ Even more and greater blunders are likely to follow now that Xi wields unchecked power and is surrounded by yes-men who will avoid telling him what he needs to hear. ”

Science withers without freedom of thought

Some naysayers had thought this unlikely. While plenty of autocrats had presided over rapid economic expansions, never before had a non-democratic regime generated sustained, innovation-based growth. Some Westerners were mesmerized by Soviet scientific prowess in the 1950s and 1960s, but often they were channeling their own biases. By the 1970s, the Soviet Union was clearly falling behind and stagnating, owing to its inability to innovate across a broad range of sectors.

True, some astute China observers pointed out that the Communist Party of China’s iron grip did not bode well for the country’s prospects. But the more common view was that China would sustain its astonishing growth. While there were debates over whether China would be a benign or malign force globally, there was little disagreement that its growth was unstoppable. The International Monetary Fund and the World Bank made a habit of projecting past Chinese growth rates into the future, and books with titles like “When China Rules the World” proliferated.

For years, one also heard arguments that China had achieved “accountability without democracy,” or that the CPC leadership was at least constrained by term limits, a balance of powers, and other good-governance stopgaps. China won praise for demonstrating the virtue of government planning and offering an alternative to the neoliberal Washington Consensus.

Even those who recognized China’s model as a form of “state capitalism”—with all the contradictions that entails—projected that its growth would continue largely unabated.

Perhaps the most potent argument was that China would control the world by dint of its ability to achieve global dominance in artificial intelligence. With access to so much data from its massive population, with fewer ethical and privacy restrictions than those faced by researchers in the West, and with so much state investment in AI, China was said to have an obvious advantage in this domain.

But this argument was always suspect. One cannot simply assume that advances in AI will be the main source of economic advantage in the future; that the Chinese government will allow for ongoing high-quality research in the sector; or that Western companies are significantly hampered by privacy and other data regulations.

China’s prospects today look far less rosy than they once did. Having already eliminated many internal checks, President Xi Jinping used the CPC’s 20th National Congress to secure an unprecedented third term (with no future term limits in sight), and stacked the all-powerful Politburo Standing Committee with loyal supporters.

This consolidation of power comes despite major unforced errors by Xi that are dragging down the economy and sapping China’s innovative potential. Xi’s “zero-COVID” policy was largely avoidable and has come at significant cost, as has his support for Russia’s war in Ukraine.

Even more and greater blunders are likely to follow now that Xi wields unchecked power and is surrounded by yes-men who will avoid telling him what he needs to hear.

But it would be a mistake to conclude that China’s growth model is crumbling just because the wrong person ascended the throne. The turn toward a harder line of control that started during Xi’s first term (after 2012) may have been inevitable.

China’s rapid industrial growth in the 1990s and 2000s was built on huge investments, technology transfers from the West, production for export, and financial and wage repression.

But such export-led growth can go only so far. As Xi’s predecessor, Hu Jintao, recognized in 2012, China’s growth would have to become “much more balanced, coordinated, and sustainable,” with far less reliance on external demand and much greater reliance on domestic consumption.

At the time, many experts believed that Xi would respond to the challenge with an “ambitious reform agenda” to introduce more market-based incentives. But these interpretations overlooked a key question that China’s regime was already grappling with: how to maintain the CPC’s political monopoly in the face of a rapidly expanding, economically empowered middle-class. The most obvious answer—and perhaps the only answer—was greater repression and censorship, which is exactly the path Xi took.

For a while, Xi, his entourage, and even many outside experts believed that the economy could still flourish under conditions of tightening central control, censorship, indoctrination, and repression. Again, many looked to AI as an unprecedentedly powerful tool for monitoring and controlling society.

Yet there is mounting evidence to suggest that Xi and advisers misread the situation, and that China is poised to pay a hefty economic price for the regime’s intensifying control. Following sweeping regulatory crackdowns on Alibaba, Tencent, and others in 2021, Chinese companies are increasingly focused on remaining in the political authorities’ good graces, rather than on innovating.

The inefficiencies and other problems created by the politically motivated allocation of credit are also piling up, and state-led innovation is starting to reach its limits. Despite a large increase in government support since 2013, the quality of Chinese academic research is improving only slowly. Even in AI, the government’s top scientific priority, advances are lagging behind the global tech leaders—most of them in the United States.

Currying favor instead of seeking truth

My own recent research with Jie Zhou of MIT and David Yang of Harvard University shows that the top-down control in Chinese academia is distorting the direction of research, too. Many faculty members are choosing their research areas to curry favor with heads of departments or deans, who have considerable power over their careers. As they shift their priorities, the evidence suggests that the overall quality of research is suffering.

Xi’s tightening grip over science and the economy means that these problems will intensify. And as is true in all autocracies, no independent experts or domestic media will speak up about the train wreck he has set in motion.

Daron Acemoglu, professor of economics at MIT, is co-author (with James A. Robinson) of “Why Nations Fail: The Origins of Power, Prosperity and Poverty” (Profile, 2019) and  “The Narrow Corridor: States, Societies, and the Fate of Liberty “(Penguin, 2020).

More on China from MarketWatch

From Barron’s: China’s Old Economic Model Has Run Out of Road. Wall Street Is Just Catching Up.

Greg Robb: China’s Xi may have all the power in the world but he still can’t implement a property tax