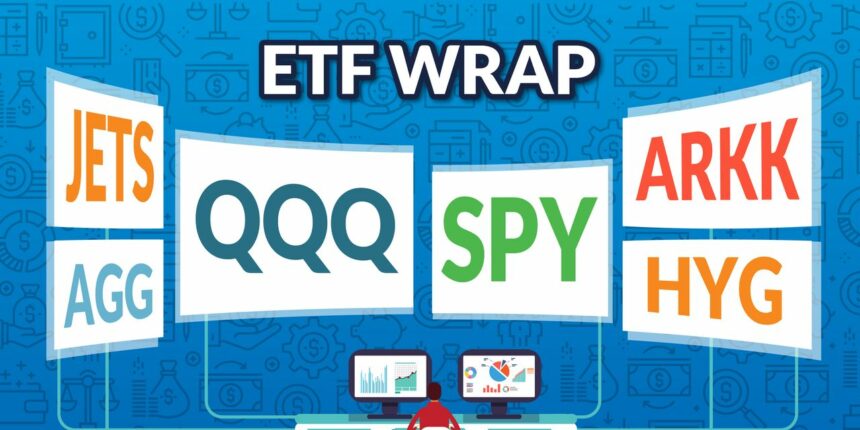 Hi! Stock and bond ETFs both got a boost from Thursday’s inflation report. This week’s ETF Wrap also digs into some equal-weighted and actively managed strategies that have seen some increased interest lately.

Please send feedback and tips to christine.idzelis@marketwatch.com. You can also follow me on Twitter at @cidzelis and find me on LinkedIn.

Tumultuous markets got some relief Thursday after fresh inflation data pointed to an easing in the surging cost of living in the U.S., sending equity and bond exchange-traded funds higher.

“It was a good number,” said Doug Fincher, a portfolio manager at Ionic Capital Management, in a phone interview. “A real big sigh of relief.”

The U.S. Bureau of Labor Statistics said Thursday that inflation measured by the consumer-price index rose 0.4% in October for an annual rate of 7.7%. Last month’s rise was softer than expected, with the rate of inflation easing from 9.1% in the 12 months through June.

In equities, shares of the SPDR S&P 500 Trust
SPY
soared 5.5% Thursday, while the Invesco QQQ Trust
QQQ,
which tracks the tech- and growth-oriented Nasdaq-100 index, surged 7.4%, according to FactSet data.

Meanwhile, investor demand for actively managed exchange-traded funds has recently picked up while equal-weighted strategies have also been getting attention in this year’s bear market.

Nick Kalivas, head of factor and core equity product strategy for Invesco ETFs, said by phone that the Invesco S&P 500 Equal Weight ETF
RSP
has recently seen an uptick in inflows. The interest is tied to concern over the cap-weighted S&P 500 index being heavily concentrated in megacap companies, whose valuations have slumped in the global economic slowdown, he said.

“There’s been this realization that the big names are succumbing to the global macro environment,” said Kalivas. “Some of the earnings estimates on these names, they’ve started to tail off.”

Relative to the S&P 500 index, the Invesco S&P 500 Equal Weight ETF is underweight in technology and communication services, has more exposure to smaller companies than the megacaps and tilts toward value stocks, said Kalivas.

Demand for the Invesco S&P 500 Equal Weight ETF was “very strong” early in 2022 through April, with flows picking up again in recent weeks, according to Kalivas

Communication services, which includes tech giants such as Facebook parent Meta Platforms Inc.
META
and Google parent Alphabet Inc.
GOOGL,
has been the hardest hit sector of the S&P 500 index this year with a loss of almost 43% this year through Wednesday, according to FactSet data.

The S&P 500’s consumer-discretionary sector, which includes Tesla Inc.
TSLA,
had the next biggest losses this year with a 36.4% drop in 2022 through Wednesday. And information technology, which includes Nvidia Corp
NVDA,
has tumbled almost 31% over the same period, also bleeding more than the broad index.

After the latest inflation report, all three of these badly bruised sectors saw some of the strongest gains Thursday across the soaring S&P 500 index.

“I think that buying battered technology stocks in indexes that do not overweight the FANG+ issues, will be a very rewarding way to be positioned in and throughout 2023,” said George Ball, chairman of Sanders Morris Harris, in a phone interview.

That means investing in equal-weighted funds, such as the Invesco S&P 500 Equal Weight Technology ETF
RYT,
that target tech without overweighting the biggest companies, he said.  Equal-weighted tech ETFs may give investors exposure to “a basket of stocks that broadly have the ability to grow much more rapidly” as they’re smaller, said Ball.

While shares of the actively-managed Ionic Inflation Protection ETF
CPII
finished 1.7% lower Thursday, Fincher said the fund, which launched in June, should continue to see gains against the backdrop of elevated inflation.

The ETF, which invests in inflation swaps, swaptions and U.S. Treasury inflation-protected securities, saw a total return of around 1.6% from the end of June through Wednesday, according to FactSet.

In 2022, investor interest in actively managed ETFs has risen, according to Todd Rosenbluth, head of research at VettaFi.

In a strategy note earlier this week, he wrote that actively managed ETFs “keep punching above their weight,” attracting $59 billion this year through October, based on FactSet data. He said flows into active ETFs were “equal to 12% of the industry’s net inflows, despite representing less than 5% of the overall U.S.-listed ETF assets.”

“The environment that we’re in is more favorable toward active management,” Rosenbluth said by phone. “We also have a greater supply of products that have come to market from established asset managers.”

Among the several active ETFs highlighted in his Nov. 7 note, Rosenbluth pointed to “covered calls,” saying that the JPMorgan Equity Premium Income ETF
JEPI
“has led the charge in 2022, gathering $9.8 billion of new money.” That brought assets to $14.5 billion. The fund targets lower-risk stocks and “enhances the monthly income generated through out-of-the-money S&P 500 Index call options,” he wrote.

The JPMorgan Equity Premium Income ETF is down this year but beating the S&P 500 index. The fund, which launched in 2020, has lost 6.5% on a total return basis in 2022 through Wednesday, FactSet data show.

As usual, here’s your look at the top- and bottom-performing ETFs over the past week through Wednesday, according to FactSet data