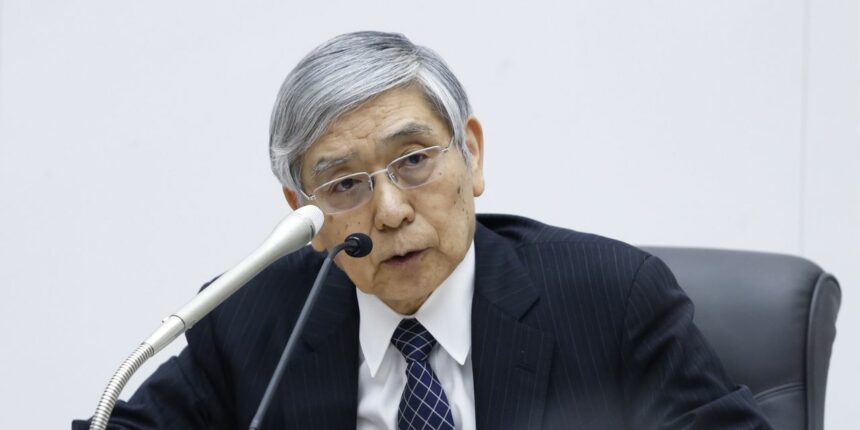 When the Bank of Japan meets later this week, investors will be watching closely for any signs that Japanese authorities might be preparing to tweak, or perhaps even jettison, a policy of actively keeping a lid on Japanese government bond yields that is looking increasingly out of step with what its rivals are doing.

The policy, known as yield curve control, has been in place since 2016. But in a world where the Federal Reserve is hiking interest rates at the fastest pace since the 1980s, Japanese authorities have decided to stand firm for a number of reasons.

In a sense, it may not matter what BoJ Gov. Haruhiko Kuroda says or does after the meeting later this week, because according to George Saravelos, Deutsche Bank’s global co-head of FX research, the central bank’s approach is already irreparably “broken.”

Over the past few months, speculators and investors have become increasingly disillusioned with the BoJ and have tried to test its limits by shorting Japanese bonds. Futures markets show government bond yields considerably higher than in the spot market, market strategists said.

As a result, yields on Japanese sovereign bonds have started to test, and even break above, the caps imposed by the BoJ, as Saravelos pointed out.

eligible for repurchase by the central bank are still trading below the YCC yield cap, he said. The rest of Japan’s tightly controlled government bond market appears to have broken free from these constraints, at least to some degree.

Even as the dollar
USDJPY,

has skyrocketed against the yen this year, Kuroda has refused to yield on yield curve control, repeatedly insisting that the Japanese central bank will wait for inflation to move reliably above its 2% target before it even considers a policy change.

Since the start of the year, the yen is down nearly 30% against the dollar.

With core prices rising 3% year over year, it would appear inflation in the world’s third-largest economy has finally topped the BoJ’s 2% target after decades of struggle to extricate the Japanese economy from a disinflationary malaise.

Japan’s Ministry of Finance has attempted to prop up its beleaguered currency by intervening directly in currency markets. Authorities have also warned that they will no longer be announcing interventions in an attempt to maximize the impact of other tactics like jawboning and “rate checks,” which is when the Ministry of Finance asks currency dealers for prices on the dollar-yen exchange rate in an effort to try and move the rate without having to deploy any capital, market strategists said.

According to Jon Turek, the founder and CEO of JST Advisors, when the BoJ meeting ends on Friday, investors will carefully scrutinize the latest batch of macro forecasts to be released by the central bank’s economists for any signs that they’re incorporating expectations for higher inflation into their figures.

These macro projections are the closest thing the BoJ has to the Fed’s “dot plot,” an aggregation of senior Fed officials’ expectations for where the Fed funds rate will be over the coming months and years.

To be sure, whenever the BoJ does decide to throw in the towel, it will need to do so carefully to avoid provoking instability in global bond markets, said Steve Englander, global head of G-10 currency strategy at Standard Chartered.

If JGB yields were to rapidly rise back toward a more market-appropriate rate, it could risk provoking a “Bank of England-type shock,” Englander said.

One thing is virtually certain: any signs of capitulation on behalf of the BoJ would likely spur the yen to strengthen markedly against the dollar, and perhaps other Asian currencies might rise in sympathy, Englander said.

Another point Saravelos brought up in his note is that if Japan continues to try to support the yen by dumping its considerable foreign reserves, including Treasurys, it could backfire by pushing the dollar even higher as the U.S. currency would strengthen in sympathy with higher yields.

Both Turek and Saravelos pointed out that Japan’s attempts to prop up the yen by dumping foreign assets could backfire by sending yields on Treasury bonds higher.

This is one reason why relying on direct intervention in currency markets to prop up the yen would likely be a “futile” endeavor Saravelos said.

However, that doesn’t mean that the BoJ sees it that way. So far, Japanese authorities have stood firm in the face of the yen’s massive depreciation. If their recent attempts to intervene tell investors anything, it’s that the BoJ doesn’t have a “line in the sand” pain point, Turek said.

Instead, it appears Japanese officials simply want to ensure that any further softening in the yen happens in a relatively orderly manner.

U.S. stocks were holding on to solid gains Tuesday, with the Dow Jones Industrial Average
DJIA,

advanced 1.4% and the Nasdaq Composite
COMP,