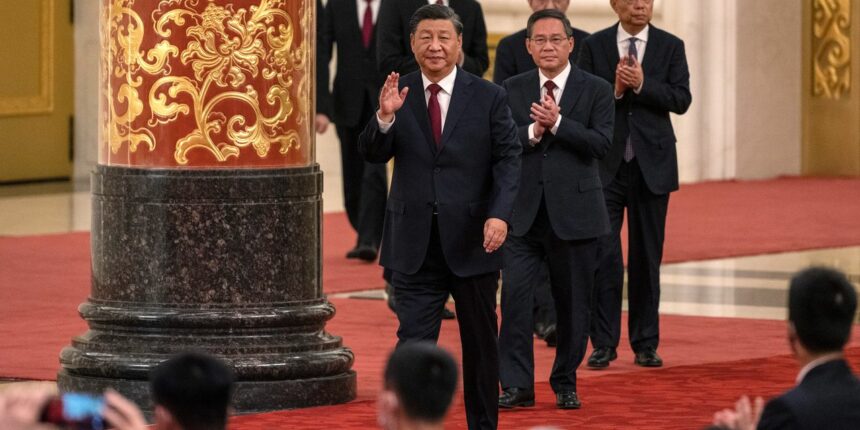 Financial markets were rattled on expectations that Xi’s policy agenda of bolstering national security and the party’s political security would shift the world’s second-largest economy toward a more state-led model. That could make maintaining political ties and the party’s ideology a higher priority than achieving economic growth and policy reform, economists said.

The selloff in Chinese assets in part reflects expectations Xi will continue with the country’s zero-COVID policy, which has resulted in sweeping lockdowns in an effort to contain the virus, said Fawad Razaqzada, market analyst at City Index and Forex.com.

“Investors are also worried that because of Xi’s loyalists being concentrated at the top of the decision-making body, there is the potential for more policy mistakes that could cause severe damage to the future path of growth. Xi will have a lot more say in how future policies will shape,” Razaqzada wrote.

ending more than 6% lower to a new 13-year low. Shares in mainland China also plunged on Monday, although not by as much. The Shanghai Composite
SHCOMP,

See: Xi’s power move punishes Chinese stocks, pushing them down as much as 26% in one day

The heavy selling in China-related assets was particularly jarring given the rosier-than-expected third quarter GDP data. China’s economy expanded by 3.9% in the three months ended Sept. 30 from a year earlier, the government said Monday in a release that was abruptly postponed as Communist Party leaders gathered last week for the congress.

The third-quarter performance exceeded market consensus of 3.4% and picked up from a 0.4% growth in the previous quarter, when growth was weighed down by a harsh two-month lockdown in Shanghai. However, the data brings the average growth for the first nine months of 2022 at 3.0%, well below the full-year target of 5.5% the government set in March.

Investors have been battered by China’s economic slowdown, due in large part to a stubborn strain of COVID-19 that has rippled through the country this year which forced hundreds of millions of people into lockdowns. Many had hoped Chinese leaders could spell out a pivot away from strict COVID-19 restrictions after the party congress.

However, Julian Evans-Pritchard, senior China economist of Capital Economics, thinks the outlook remains gloomy as the number of cities with outbreaks and lockdowns has risen to levels last seen during the peak of the Omicron wave earlier this year.

“There is no prospect of China lifting its zero-COVID policy in the near future, and we don’t expect any meaningful relaxation before 2024,” Evans-Pritchard said in a Monday note. “Recurring virus disruptions will therefore continue to weigh on in-person activity and further large-scale lockdowns can’t be ruled out.”

See: Markets on watch as China’s Party congress kicks off this weekend. What investors need to know.

The “zero-COVID” approach also worsened the weakness in the country’s debt-laden property sector. Investors feared the housing-market meltdown could turn into a mortgage collapse and hoped Xi and his new standing committee could deliver more policy support to ignite a sales turnaround.

“There are also few signs of an imminent turnaround in the property sector,” said Evans-Pritchard. “We think official GDP will expand just 3.5% next year, with actual growth likely to be even weaker.”

In addition, the downturn in the real-estate market could further suppress commodity demand and sour investors’ sentiment.

“Given that China is the biggest commodity consumer in the world by virtue of its population and growth, its economic health has a great bearing on the course of commodity prices — particularly metals and minerals,” said Boris Ivanov, founder of Emiral Resources Ltd.

“President Xi’s Congress speech on Sunday (Oct. 16) signaled that this policy (zero-COVID) will remain unchanged. This will be sad news for investors and producers of metals & minerals like iron ore to crude oil who would prefer less draconian policies sapping commodity demand.”

Prices of base metals were higher on Monday, as better-than-expected economic data from China raised hopes of stronger demand. The most-traded November copper contract on the Shanghai Futures Exchange rose 1.3% to 63,910 yuan ($8,809.70) per metric ton, while aluminum gained 0.1% to 18,640 yuan per metric ton. On New York Mercantile Exchange, copper futures for December
HGZ22,